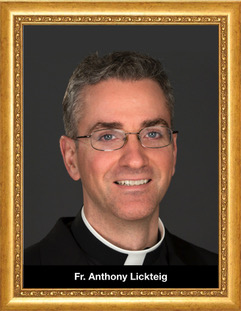 Fr. Anthony Lickteig is a priest of the Archdiocese of Washington, and was ordained by Cardinal Donald Wuerl on June 19, 2010.

Fr. Lickteig completed his theological training at the Pontifical North American College in Rome. He earned the degrees of Bachelor of Sacred Theology at the Pontifical Gregorian University and Licenciate in Sacred Theology at the John Paul II Institute for Studies in Marriage and Family, also in Rome. Prior to entering seminary, Fr. Lickteig worked for a management and technology consulting firm, having earned a bachelor’s degree in Mechanical Engineering at The University of Texas at Austin.

Prior to his current assignment, Fr. Lickteig served the parish of Our Lady Help of Christians in Waldorf, MD as a parochial vicar and the Church of the Little Flower in Bethesda, Maryland as a parochial vicar. He later served as the Secretary to Cardinal Wuerl and most recently was the pastor of both Sacred Heart Church in Bushwood, MD and Holy Angels Church in Avenue, MD. Prior to his current position, he was the Pastor of St. Mary of the Mills Catholic Church in Laurel, MD.

Father Lickteig’s parents are from eastern Kansas, but he grew up in a small town in northern New Mexico, then later Boston, Massachusetts, and from seventh grade through college, in Corpus Christi, Texas. He moved to the Washington, D.C. area in 2000, where he lived in northern Virginia and then Capitol Hill. He is thankful every day that God called him to be a priest, and through the intercession of the Blessed Mother, prays he can minister with the heart of Christ to those placed in his care.