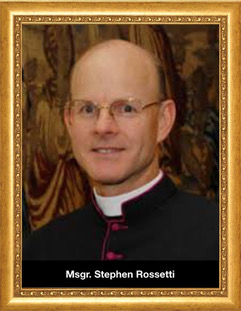 Msgr. Stephen J. Rossetti, a priest of the Diocese of Syracuse, is an expert on priestly spirituality and wellness issues. He is a Catholic speaker, educator, psychologist, and retreat leader. He served for many years at Saint Luke Institute in Maryland, rising to president and CEO. A graduate of the United States Air Force Academy, Rossetti earned a doctorate in psychology from Boston College and a doctor of ministry from the Catholic University of America. Rossetti is the author or editor of ten books, including Born of the Eucharist, Letters to My Brothers, and The Joy of Priesthood—the recipient of a Catholic Press Association book award. He serves as research associate professor of pastoral studies at the Catholic University and a visiting professor at Gregorian University in Rome.

Rossetti received a Proclaim Award from the United States Conference of Catholic Bishops as well as a Lifetime Service Award from the Theological College of the Catholic University of America. In 2010, he received the Touchstone Award from the National Federation of Priests’ Councils for a lifetime of work with priests. In 2013, Rossetti received the Pope John Paul II Seminary Leadership Award from National Catholic Educational Association for distinguished service in priestly formation and was awarded a doctor of divinity degree, honoris causa, from St. Mary’s Seminary and University.

Msgr. Rossetti has appeared on such TV shows as Meet the Press and Larry King Live.