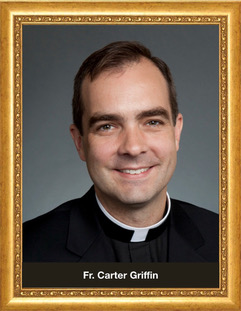 Father Carter Griffin is a priest of the Archdiocese of Washington, D.C. Raised Presbyterian, he converted to Catholicism while attending Princeton University. After graduating in 1994, he served for four years as a surface line officer in the United States Navy prior to entering the seminary.

He attended Mount St. Mary’s Seminary in Emmitsburg, MD, for two years of philosophy followed by the North American College in Rome for five years of theology.  Later he returned for doctoral studies and published a dissertation on priestly celibacy in 2011.

Father Griffin is the Rector of St. John Paul II Seminary in Washington, DC and recently published a book entitled Why Celibacy? Reclaiming the Fatherhood of the Priest (Emmaus Road Publishing).

Conversion Story — Why he is Catholic