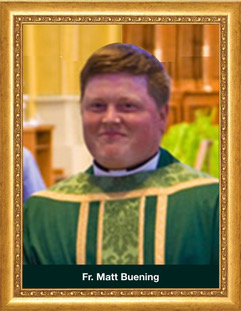 Father Matt Buening was assigned as the full-time Catholic Chaplain for Towson University in the Fall of 2015.

He was ordained a priest in 2003 and has been assigned as an associate pastor of The Church of the Immaculate Conception in Towson, MD and St. John’s Catholic Church of Columbia, MD.

For seven years he was pastor of St. Paul’s Church in Ellicott City, MD.

He went to James Madison University where he discovered his vocation, and then to St. Pius X Seminary at the University of Scranton. Father Matt also studied at the North American College in Rome where he received his S.T.L (License in Sacred Theology) in Fundamental Theology. He wrote his thesis on Cardinal Newman and Young Adult Ministry.