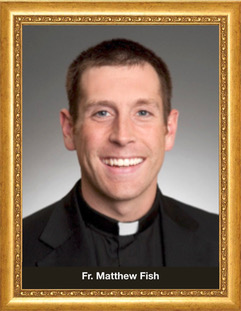 Deacon Matthew Fish currently serves as the Administrator of Holy Family Catholic Church. He will be ordained as a priests for the Archdiocese of Washington in June 2020.

As a Deacon, he previously served as a religion teacher at DeMatha Catholic High School in Hyattsville, and as the director of youth ministry and adult formation at the Shrine of St. Jude Parish in Rockville.

When he was young, his family moved to Australia for a year on an exchange program, and he attended a traditional Jesuit prep school in Sydney, St. Ignatius. During that time, he began regularly praying over the Gospels and paying close attention to the words the priest would say at Mass.  He also spent much time reading lives of the saints, especially some of the Jesuit saints and martyrs of England.

Later, In high school, he began thinking about entering seminary, going to daily Mass and going to Adoration, attending retreats, and reading theology.

He attended college at Franciscan University of Steubenville.  For a number of years after college, keep listening to the desires of his heart and the movement of the Holy Spirit which lead him to priesthood.

A native of Seattle and an active outdoorsman, the future priest played football and rugby in college and has hiked and fished throughout the Northwest. He also was a volunteer with his home county’s search and rescue team.

Deacon Fish will celebrate his first Mass on June 20 at 6:30 p.m. at St. Ignatius Church in Chapel Point.