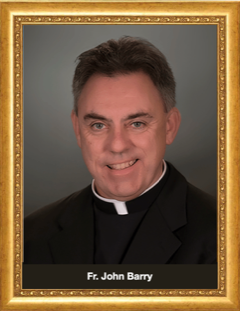 Father John Barry is Pastor of the Church of the Resurrection.

Prior to his arrival at Resurrection, Father Barry was pastor at  St Edward the Confessor in Bowie for 10 years. He also served as pastor at Holy Angels in Avenue, Our Lady’s at Medley’s Neck and at St. Nicholas in Laurel, and as a parochial vicar at St. John the Baptist in Silver Spring, St. Aloysius in Leonardtown and at St. Mary in Rockville.

A graduate of the University of Maryland, he later studied at Mount St. Mary’s Seminary in Emmitsburg and was ordained as a priest of the Archdiocese of Washington in 1988.

He has served in youth ministry and as a hospital chaplain and is the son of Patricia Barry and the late Deacon Kevin Barry.