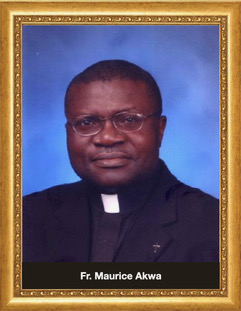 Fr. Maurice Akwa was born in Weh, North West Region of Cameroon, but ordained priest for the Archdiocese of Bertoua in the East Region of Cameroon.  He has a 1st degree in Philosophy and in Theology, as well as a Licentiate in Sacred Theology specializing in Biblical Theology which he has taught for 15 years in the Major Seminary in Bertoua. He has been a priest for 23 years and is now on a temporal academic residence in Maryland, completing an online doctorate in Pastoral Clinical Psycho-Therapy.

Fr. Akwa is a Roman Catholic Diocesan priest from Cameroon & holds a:

He has served as:

Among other things, he has been Diocesan Spiritual Director for Catholic Men and Catholic Women’s Associations, Diocesan Ecumenical Coordinator as well as leading Chaplain and Coordinator of the Association of Widows and Orphans.

Born in Small Soppo on September 22, 1963, Fr. Maurice Akwa decided to become a priest on the feast of St Stephen, 26th December 1971, shortly after his 1st Holy Communion. He has been to Minor seminary, 1978-1983, worked in Sonel Wum, 1983-85, and attended Government High School Wum 1985-87 before going to Bambui 1987. It is when he was not allowed to return to Bambui after his pastoral year in Small Mankon 1990-1991, during the hot days of SDF that he taught in Sacred Heart College Mankon 1991-1993 before joining the Archdiocese of Bertoua and sent to do Theology in the Catholic University Yaounde.

Fr. Maurice Akwa loved Music all his life, being member of school choirs from primary school to higher education and choir conductor for 18 years. He coached basketball for two years and was Student University President in the Catholic University Yaounde 1995/96. He acted drama with the seminary troop and a public theatre club, the Merry Troopers, with Ayah Paul.

As a student at St Mary’s seminary in Baltimore 2004-2007, with other ex-seminarians from Bambui in association with close friends, they nursed the idea of the creation of a Cameroon Catholic Community for the Washington DC Metro area and this was hatched in March 2006.

Fr. Maurice Akwa a passion for the sick, underprivileged and the aging.

He is now on a temporal academic residence in Maryland, completing an online doctorate in Pastoral Clinical Psycho-Therapy.