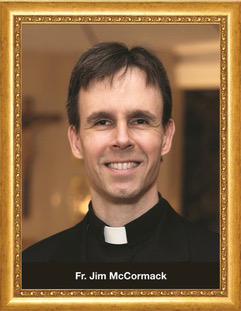 Fr. Jim McCormack, MIC  serves as novice master, prefect of formation and local superior at the Marian Scholasticate in Washington, D.C. He regularly teaches classes on spirituality to the Marian novices.

Father Jim professed his Perpetual Vows in the Congregation of Marian Fathers of the Immaculate Conception of the B.V.M. on Aug. 16, 2009 and was ordained to the priesthood on July 10, 2010.

Father received his Bachelor’s degree in electrical engineering from Yale University and his Master’s at Stanford University. It was during graduate school when Fr. Jim had his first sense of a calling to the priesthood, “but I did my best to ignore it,” he says with a smile. After he broke up with his fiancée, he decided to take God’s call more seriously.

Father Jim was given the grace to follow the Lord’s call during a pilgrimage to Italy in 2002. “Due to Mary’s help, I came away from that pilgrimage with a deep sense of peace about becoming a priest,” he says.

He joined the Marians in 2005 because of their devotion to Our Blessed Mother, Mary Immaculate, their active apostolic spirit, and their desire to spread devotion to Jesus, The Divine Mercy. The Radio Maria program will give special emphasis to the topic of hearing God’s call, Mary, Divine Mercy, and spiritual fatherhood of souls.