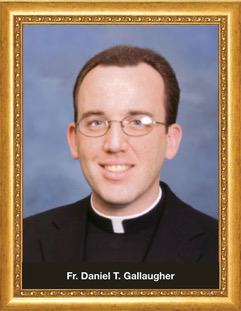 Fr. Dan Gallaugher is a Catholic priest of the Archdiocese of Washington. He received his priestly formation at Mount St. Mary’s Seminary, Emmitsburg, Md., and was ordained a priest in 2009.  His first four assignments were as Parochial Vicar of St. Mary, Piscataway, Clinton, Md.; St. Bartholomew, Bethesda, Md.; St. Martin of Tours, Gaithersburg, Md.; and St. Bernadette, Silver Spring, Md. Currently he serves as Chaplain in the Archdiocese’s Department of Special Needs Ministries, including St. Francis of Assisi Deaf Catholic Church and the Gallaudet University campus ministry.

Fr. Daniel Gallaugher is the son of Evangelical Protestant missionaries. He spent his teenage years in Spain, where his parents moved to work as missionaries, and finished high school at a boarding school in Germany. Daniel attended Methodist, Evangelical and Episcopal churches growing up and during college. He studied communications at Wheaton College in Illinois. “I had just begun to consider priesthood there when I was drawn to consider Catholicism: the two discernments then ran side-by-side,” he said. He worked as a graphic designer after college. In 2001, Daniel converted to Catholicism and he entered Mount St. Mary’s Seminary in Emmitsburg, Md. in 2003.