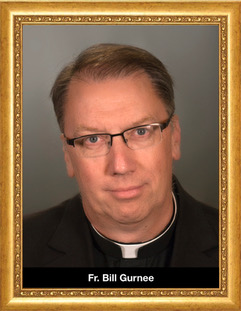 Father William H. Gurnee currently serves as both the Pastor of St. Joseph’s and Adjunct Spiritual Director for the Archdiocese of Washington Priest Vocations.  Since ordination, he served at a number of parishes as parochial vicar, was Priest Secretary to Cardinal McCarrick, and was college chaplain at George Washington University and American University.  He was pastor of Holy Angels Catholic Church in Avenue, MD and later Spiritual Director of John Paul II Seminary.

While Pastor, Fr. Gurnee celebrated the first annual Gold Mass for Congressional Staffers on March 19, 2019. He was joined by Jesuit Father Patrick Conroy (Chaplain of the U.S. House of Representatives) and Father Carter Griffin (Vice-rector of the Saint John Paul II Seminary in Washington).  Additionally, he served as the guest chaplain at the House of Representative and gave the opening prayer. In anticipation of Memorial Day, Fr. Gurnee prayed for all those who gave their lives in service of our country and for their families.

Fr. Gurnee has three videos in the C-SPAN Video Library; the first appearance was a 2014 House Proceeding as a Director for the Spiritual Formation of the Blessed John Paul II Seminary (Washington, DC). The year with the highest average number of views per program was 2017 with an average of 381 views per program.

Fr. Gurnee was born in Westchester County, NY  and is one of four children born. In 1973, his family moved to Greensboro, NC where he graduated from HS and from college at North Carolina State in 1986 with a degree in economics. Two years after working in sales, he moved to Washington to pursue a career in politics. He worked for the Hon. Robert F. Smith (OR-2) for 5 years and when the Congressman retired, he entered Mt. St. Mary’s Seminary.   He was ordained June 10, 2000 and celebrated his first Mass the next day at his parish of St. Joseph’s on Capitol Hill.

Fr. Gurnee said that “It is a privilege, an honor and a tremendous joy to be pastor here at St. Joseph’s.”

St. Joseph’s: A 150-Year-Old Cornerstone of the Community